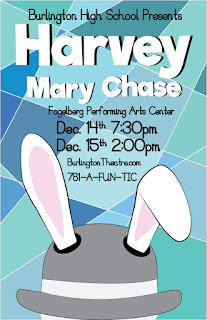 Comedies have long been a favorite of Burlington audiences so it is with great excitement that Burlington High School announces it will present Harvey, the Pulitzer Prize-winning comedy by Mary Chase. Performances will take place on Friday, December 14 at 7:30 pm and Saturday, December 15 at 2:00 pm.

Best known for its 1950s film adaptation starring James Stewart, Harvey is the story of a perfect gentleman, Elwood P. Dowd, and his best friend, Harvey, a six-foot-tall, invisible rabbit. When Elwood begins introducing Harvey around town, his embarrassed sister, Veta Louise, and her daughter, Myrtle Mae, decide to have him committed. However, comic misunderstandings ensue, hilarity abounds and, in the end, acceptance reigns supreme!

Performances of Harvey will take place in the Fogelberg Performing Arts Center, an accessible venue, located on the campus of Burlington High School, 123 Cambridge Street, Burlington MA. Tickets are $10 for students and senior citizens, $15 for adults, and are available at BurlingtonTheatre.com, 781-A-FUN-TIC and at the door.
Posted by Mark Sullivan at 8:11 AM