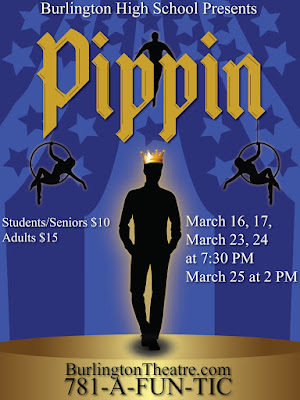 Burlington High School is abuzz with the announcement of its upcoming spring musical, Pippin, which will be performed March 16, 17, 23 and 24 at 7:30 pm, and March 25 at 2:00 pm. All performances will take place in the Fogelberg Performing Arts Center of Burlington High School.
Pippin is the story of one man’s journey to be extraordinary. Winner of four Tony Awards including Best Musical Revival in 2013, this updated circus-inspired version of Pippin continues to captivate and appeal to the young at heart worldwide.
Written by musical theatre giant Stephen Schwartz, Pippin is filled with unforgettable songs including “Magic To Do,” “Corner of the Sky,”  “No Time At All,” and “Kind of Woman.”
Heir to the Frankish throne, the young prince Pippin is in search of the secret to true happiness and fulfillment. He seeks it in the glories of the battlefield, the temptations of the flesh and the intrigues of political power (after disposing of his father, Charles). In the end, though, Pippin finds that happiness lies not in extraordinary endeavors, but rather in the unextraordinary moments that happen every day.
Leading the cast of the BHS production is Luis Villalta as Pippin, with Jennifer L’Heureux as Leading Player, Ivy Saltsman as Bertha, Mia Campbell as Catherine, Mikey Fazio as Charles, Jessie Goober as Fastrada and Nathaniel Trofimow as Lewis.
Select dancers, led by co-dance captains Alexandria Floyd and Kellsee Lynch, are Mikaila Gnerre, Jessie James, Alyssa Keane, Leila Kiddu, Jillian Murray, Laura Prendergast, Julie Surabian, Katie Surabian, Grace Visco and Juliana Cameli. Joining them are dance ensemble members Gaia Arno, Erin Feeney, Caitlin Martinage and Kayla Santiana.
Select Singers are Bella Alessi, Madelyne Gooltz, Julianna Grossman, Laura Harder, Erin Kerr, Chloe MacNeil, Hannah MacNeil, Nicole Perry, Caitlyn Reed, Diana Sears, Kathryn Woodilla, Cam Noonan, Caroline O’Callaghan and Caitlin Shea.  Also, Jensine Wagner, Angie Minichiello, Michelle Pothier, Christina Raposo, Doug Edwards, Christina Charmant, Christian Weisse, Timothy Driscoll, Luciano Szekely Corsi, Ben Horgan. Vocal ensemble members include Cathy Chang, Piper Ladd, Amanda McCombs,  Nicole Noon, Ashwini Shinde, Levi Theirrien, Jessica Jung and Makenna Rousseau.
Tickets for Pippin are $10 for students and senior citizens, $15 for adults. They can be purchased online at BurlingtonTheatre.com, by phone at 781-A-FUN-TIC (781-238-6842) and at the box office on the dates of performances. Fogelberg Performing Arts Center, an accessible venue, is located at 123 Cambridge Street, Burlington, MA, on the campus of Burlington High School.
Posted by Mark Sullivan at 10:26 AM