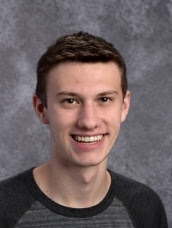 Nick Vallerand, is a senior at Burlington High School. He is a studious, persistent student with an open mind ready to learn. He comes from a family of five children and he is the middle child. He pushes himself academically as he has taken AP classes both his junior and senior year.

In his junior year, he took AP World History and in his senior year, he is taking AP Environmental Science.  He is also challenged by his other classes at the honors level. He believes strongly that if he puts his mind to it, and he tries his hardest, he will be successful both academically and socially and personally as well.

He is involved in activities here at BHS including a member of the DECA Club, a BHS mentor, a Rotary Interact member and most recently he has been admitted to the National Honor Society.

In the DECA Club, Nick holds a leadership position in the Club.  DECA is a co-curricular club of marketing, management and entrepreneurship students. During competitions, they learn 'real life' skills. He has traveled to the International Career Development Conference in Anaheim California where he attended various leadership development meetings. Nick plans to pursue a degree in Business Administration in College so he feels his DECA involvement is crucial to his future plans.

Nick is also involved in the mentoring program at BHS. He has mentored members of the freshman class both his junior and senior years. He enjoys helping the freshmen adjust to the transition between middle and high school, as he remembers his transition was not as smooth when he left MSMS to come to BHS. He is always willing to be there to answer any questions these young students may have about BHS.

Nick also has a part-time job during the school year at the Burlington Ice Palace that he enjoys very much. In the summertime, he works for his parent's pest control company, NW Pest Control in customer service. He enjoys working as the income he earns helps him to feel independent.

He is successful today due to his hard work, determination and commitment both in and out of school. He believes all of these experiences have helped to shape him into the person he is today. 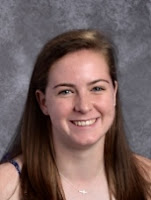 Meghan Gaffney is a senior at Burlington High School and has enjoyed getting involved in many different activities over the last four years. She has taken a rigorous course schedule from honor classes to Advanced Placement classes in Chemistry, Statistics, Biology, and World History, all the while making high honors and honor roll throughout her entire four years at Burlington High School.

This academic success invited her to join the National Honors Society, a group that she has been a member of both her junior and senior year. Meghan has been taking Italian for four years and during her junior year, she became Treasurer of the Italian club which led her to become President in her senior year. Meghan is an extremely well-rounded student, who is a role model to her younger peers. This caused her to take on the role of mentor to the incoming freshman class, sharing her insights into academic success, while being able to manage her time for the many extra curriculum activities that she is involved in.

Her senior year she became a mentor leader, advising and training the other mentors. Meghan is a student athlete who participates in three varsity sports: field hockey, ice hockey, and softball.  Her competitive nature and her love of playing have earned her the captain role for all three teams in her senior year.  Outside of school, Meghan continues her love of hockey by volunteering for the town of Burlington’s skating program, where she tries to pass on this passion she has for the sport.  Meghan also enjoys volunteering at the Burlington Food Pantry, for the Burlington Education road race and the Burlington Recreation Department. Meghan has worked at several jobs during the summer and school year.  She has been a pool supervisor at Simonds wading pool, and for the last two years, Meghan has been working at Winchester Hospital in the food services department. Meghan plans to attend a four-year college and is excited about what future opportunities are waiting for her.

Posted by Mark Sullivan at 7:56 AM