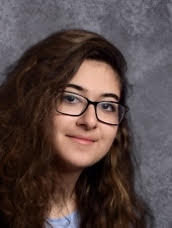 Rana Hussein is a hardworking student at Burlington High School who is passionately curious about learning.  She has a wide array of interests, and her rigorous and varied selection of courses during her time in high school, from AP Calculus to AP World History to AP English, has reflected this.  Rana began attending Burlington High School when she moved from New Jersey to Burlington at the start of her junior year.  Since then, she has embraced the exciting opportunities that her new environment had to offer.

At her previous school, Rana was a member of the science league team, math team, and the school newspaper.  Outside of school, she was also an involved member of an organization called Girls’ Advisory Council, which was dedicated to taking steps toward resolving issues of gender inequality. Rana was also a violinist in  her school orchestra, a class she always looked forward to despite the sometimes frustrating practice sessions and occasional harsh criticisms from her conductor, because the final product was always an emotion-evoking musical telling of the story of The Phantom of the Opera or a thrilling collection of the Harry Potter soundtrack  which would eventually lead her group to state qualifiers of the Teen Arts Festival.

When she moved to Burlington, Rana found that several of her previous activities were not offered, so she embraced the school’s new opportunities. She became a member of Multicultural Club, which allows students to understand diverse cultures, and became vice president as a senior.  She was initially drawn to the club’s open discussion of cultural awareness, which was not as prevalent in her previous school, and enjoyed organizing the club’s main event, Holiday Traditions, which allows students to share elements of their culture with others through food, music, traditional clothing, and posters.  Rana has also been a member of peer tutoring club since her junior year and became co-president of the club as a senior.  She also became a member of NHS, where she became the Community Service Coordinator.  Outside of school, Rana has volunteered as a summer camp counselor at GCLEA for two years, ran the children’s summer reading desk at the public library, and currently works at Kumon.  Rana is passionate about giving back to her community and was able to do so through all of her clubs and activities.

Rana plans to attend a four-year college but is still unsure about what field of study she would like to pursue.  She loves to read and write and enjoys analyzing literature for broader themes, but also enjoys the systematic logic required of the math and sciences.  Rana hopes to tap into both of these areas of interest in whatever path she chooses to pursue, but regardless of wherever this path leads her, she is excited to face all of the academic opportunities of her future. 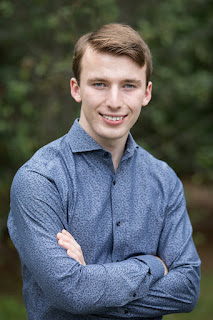 Ben Horgan is a senior at Burlington High School. He is a hardworking student who is committed to his schoolwork. Ben has a passion for learning and challenges himself academically; he has been taking AP courses since his sophomore year, being currently enrolled in AP Calculus, Chemistry, and Physics, along with honors literature and Latin. He has been on the High Honor Roll almost every term throughout his high school career. He hopes to attend a prestigious technical college to bring him to his goal of being an artificial intelligence-focused computer scientist. He is currently the lead programmer for a video game he is developing at the help desk with his friends. He has coded multiple other games and utilities, such as a graphing calculator and a version of 20Q. The summer before his senior year, he interned for Interlock Technology, a data migration company, where he coded a utility to help clients search large feedback files.

Aside from his interest in computing, Ben is heavily involved outside of academics. He coordinates meetings and school-wide events as the current Executive Board President of Student Council, having served three previous years as Class Vice President. He is the Secretary of the BHS chapter of National Honor Society, of which he has been a part since sophomore year. He enjoys mathematics and is a captain of the BHS Math League. He is also a Mentor Leader for the school’s team of student mentors. He is additionally involved with Latin Club and Programming Club. He has enjoyed acting in BHS dramas and musicals and hopes to continue in this year’s shows. He enjoys playing the guitar and has been in a band for the past four years, performing at BHS’s Battle of the Bands the past two.

Ben plans to continue his passions in college. He would appreciate an opportunity to attend any of a number of universities with great computer science programs.

Posted by Mark Sullivan at 7:23 AM