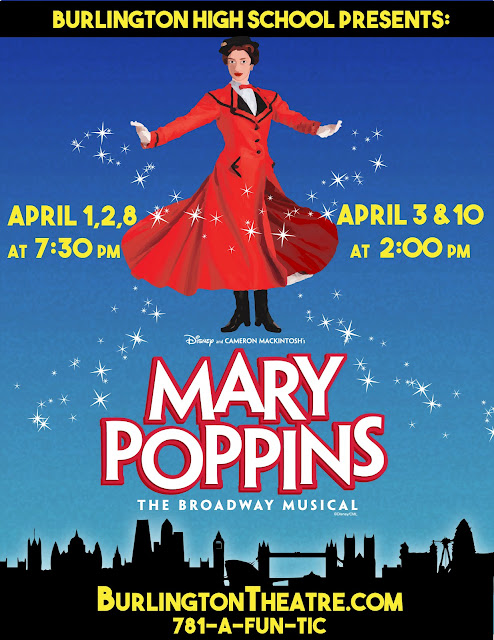 Spit Spot! It’s time to take a magical trip back to 1910 England as Burlington High School prepares for its annual spring musical, Mary Poppins, the Broadway Musical. Performances will take place April 1 through April 10 in the Fogelberg Performing Arts Center of Burlington High School (see below for exact dates and times).

Based on the P.L. Travers series of children’s books and the 1964 Disney film, Mary Poppins, is a delightful combination of both pieces, carefully interwoven with a book by Julian Fellowes and filled with cherished songs.


The story begins as the jack-of-all trades, Bert, introduces the troubled Banks family of Cherry Lane.
Young Jane and Michael have sent many a nanny packing before Mary Poppins arrives on their doorstep. Using a combination of magic and common sense, she must teach the family how to value each other again. Mary Poppins takes the children on many magical and memorable adventures, but Jane and Michael aren't the only ones she has a profound effect upon. Even grown-ups can learn a lesson or two from the nanny who advises, "Anything can happen if you let it."

Mary Poppins is filled with iconic music that has stood the test of time. The Richard and Robert Sherman original score includes, "Let's Go Fly a Kite," "Practically Perfect," “Spoonful of Sugar,” "Jolly Holiday," "Step In Time," "Chim Chim Cher-ee," "Feed the Birds!" and "Supercalifragilisticexpialidocious!” Additional songs for the production were composed by Anthony Drewe and George Stiles for the Broadway production.

Mary Poppins has three evening performances on April 1, 2 and 8 at 7:30 pm and two matinee performances on April 3 and 10 at 2:00 pm. Tickets are $10 for students and senior citizens and $15 for adults and can be purchased online at BurlingtonTheatre.com, by phone 781-A-FUN-TIC and at the door (if still available).