Three BHS seniors Shivam Ghandi, Niket Patel, and Darshil Pate were recently invited to the Kennedy Space Center to pitch their Android application to investors. They will also be meeting with scientists and government officials as part of the Conrad Spirit of Innovation Challenge later this month.  The application they're developing allows athletes to diagnose concussions on their own and send results to doctors and parents.

Yesterday, I had the privilege to visit the Google Offices in Cambridge with them as they presented their App (GyroSafe) to Google Application Developers. The students delivered an excellent pitch and received first class feedback from the folks at Google. It was great to see first hand how the boys intend to represent BHS at the Innovation Summit, which will take place during April Vacation in Cape Canaveral.

Special thanks to to Dr. Conti, who set up the meeting with Google, Mr. Steve Clark at Google who arranged the afternoon for us, and to Mr. Jignesh Ghandi who made the trip in with us. 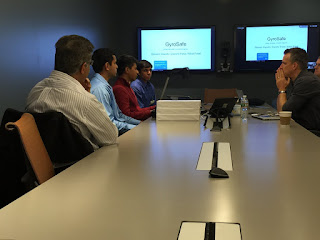 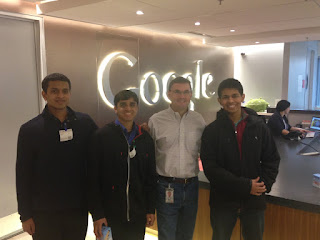 Posted by Mark Sullivan at 3:12 PM