I am proud to share some really cool work coming out of Mr. Milton's History class through his Digitally Altered Image contest. Mr Milton's assignment which asked students to use digital tools - Explain Everything, Photoshop, Adobe apps - to alter pop culture images to tell a new historical story. Students were given examples from some of Mr. Milton's work and asked to also write the reasoning for their alteration and an explanation of their images. The images from all of the students will be used by each other as review tools for midterm exams.

Congratulations to juniors Dan McCarthy and Anna Tamura for winning Mr. Milton's Best Historical Digitally Altered Image contest during the first quarter!
Dan McCarthy altered a poster of the film A Clockwork Orange to tell the story of Robespierre during the French Revolution in his poster titled "Virtuous Terror." To make society more "virtuous", Robespierre led France into what he called The Reign of Terror where people he saw as enemies were often killed. 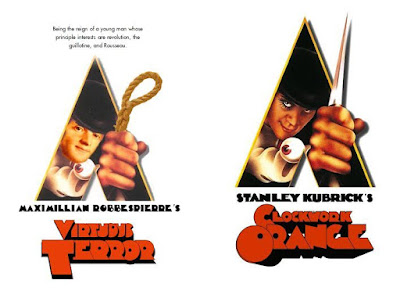 Anna Tamura altered the poster from the film Scott Pilgrim vs. the World to tell the story of Galileo who attempted to explain to the world that the earth was not the center of the universe - which put him at odds with the church, forcing him to recant his beliefs and live under house arrest. 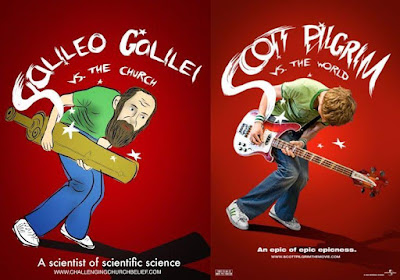 You can read more about this project on both Mr. Milton's and, our technology integration specialist, Ms Scheffer's blog.

Dan and Anna - everyone is impressed with your creativity and you have deservedly won a place on the hall of fame wall in Mr. Milton's classroom.
Posted by Mark Sullivan at 10:22 AM