Burlington High School took time to recognize the 14th year anniversary of September 11, 2001. Time will go on for everyone who was affected by this tragedy, but we paused this morning to remember - so we never forget this horrible tragedy and the thousands of innocent people who lost their lives.

We also took time to specifically remember several members of the Burlington Community who lost their lives on 9/11:

In addition to a moment of silence and the singing of the National Anthem, a vase with four roses is placed in the lobby every year September 11 - it sits in front of the plaque in memory of the four members of the BHS community we lost - and will never forget. 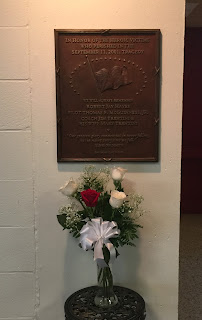