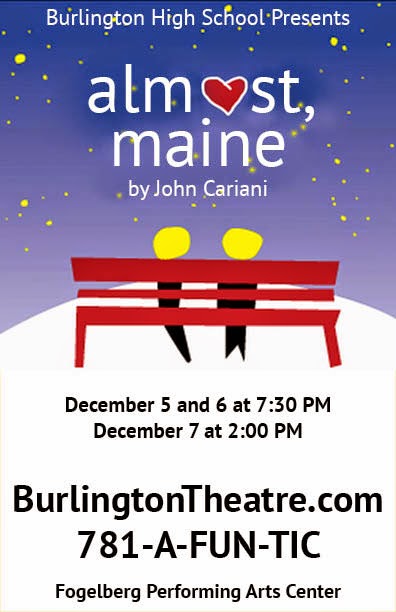 Described by the New York Times as "a comedy comprising almost a dozen two-character vignettes exploring the sudden thunderclap of love and the scorched earth that sometimes follows,” the romantic comedy is a favorite of community and high school theatre groups.

On a cold, clear, moonless night in the middle of winter, all is not quite what it seems in the remote, mythical town of Almost, Maine. As the northern lights hover in the star-filled sky, Almost's residents find themselves falling in and out of love in unexpected and often hilarious ways. Knees are bruised. Hearts are broken. But the bruises heal, and the hearts mend—almost—in this delightful midwinter night's dream.

Tickets for “Almost, Maine,” priced at $15 for adults and $10 for students and senior citizens, can be purchased online at www.BurlingtonTheatre.com, by phone at 781-A-FUN-TIC (781-238-6842) and at the door. Fogelberg Performing Arts Center is an accessible facility and is located at 123 Cambridge Street, Burlington, Massachusetts.

Posted by Mark Sullivan at 7:46 AM