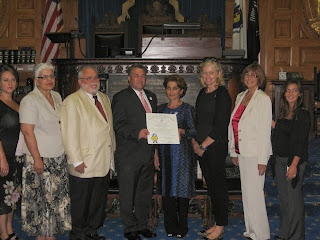 HELPIS, a Burlington-based non-profit, founded to encourage and promote good and charitable deeds by groups and individuals, was honored by the Massachusetts Legislature with an official citation on September 10, 2013.

BOSTON -- HELPIS, a Burlington-based non-profit, founded to encourage and promote good and charitable deeds by groups and individuals and to create the observance of the Help Me Help Someone celebration during the month of May, was honored by the Massachusetts Legislature with an official citation on September 10, 2013, for its “commitment to promoting and encouraging charitable deeds.” Representative Kenneth Gordon (D-Bedford, Burlington) spearheaded the effort to get the organization recognized by the legislature. HELPIS members were treated to a tour of the state house and a lunch with Rep. Gordon and other state representatives. President Joyce Deliyiannis and her family, Treasurer Robin Rees Tyrie, Vice President Emily Trask, Committee Member Sophia Skopetos, and other friends of HELPIS, also had the opportunity to meet with Ronald Mariano (D-Quincy), House Majority Leader, to talk about the organization’s goals for the future.  “This is the beginning of great things for HELPIS,” said President and Founder Joyce Deliyiannis. “We are honored to receive this citation, which recognizes the work that HELPIS has done and highlights the work we will continue to do going forward. This official acknowledgement brings us one step closer to establishing the month of May as a month celebrating giving and good deeds.”

In the short history of the organization, there are already numerous examples of HELPIS giving back to the community:

About HELPIS, Help Me Help Someone.  HELPIS is a Massachusetts-based non-profit organization built on the goal of creating a community of equals who provide whatever kindnesses they are able tothe people they encounter in an ever-widening network of generosity. HELPIS was founded by Joyce Deliyiannis, who believes that kindness has the power to bring hope to those searching for it and by extension, change lives. During the month of May, HELPIS challenges people to help someone in need without asking for anything in return as a reminder that even simple acts of kindness can heal, uplift, inspire, and improve the lives of others.