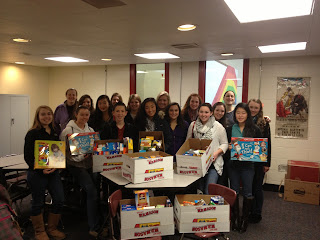 During the month of December, Burlington High School’s Spanish Club spearheaded its’ annual food drive for the YWCA Fina House in Lawrence, MA. With donations made by BHS’s Spanish students and French Club, 24 boxes of food were filled, including pasta, soup, rice, beans, cereal, juice, fruit, baking items, spices, peanut butter, and jelly. On Thursday, December 13th the Spanish Club delivered the donations to the Fina House shelter for women and their children. Students witnessed first hand where the food was being donated and learned how they made a positive impact on the lives of less fortunate individuals that arrive to the shelter with little to no food. This year, there was a special donation of new toys for the children of Fina House that was made by BHS parent, Maureen Hardy. A huge thank you to BHS Spanish classes, French Club, and Mrs. Hardy for the amazing contribution to Lawrence’s YWCA Fina House during the holiday season.
Posted by Mark Sullivan at 9:13 AM