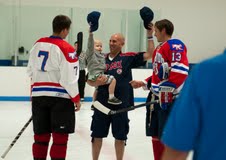 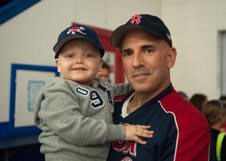 On June 23rd Marty's Challenge hockey game was played between Burlington High School's 2009 super eight team and the 2012 Division 1 state championship team (see photos of teams below).  The event was a huge success as over $4500 was raised for the Wells family (see father and son above). This game, called Marty's Challenge, became a community event - about 300 people attended.  There were numerous volunteers including announcer Jack Ferren, referees Dan Brothers and Andy Spinali, photographer and 2012 graduate Casey Landry, Kate McMahon and her family, and many others ( I am sorry if I didn't have your name).  Not only was the game a huge success raising money, but the game itself was great with the 2012 team winning 5-3 in a to be expected competitive game.

Please tune into channel 4 news tonight, Marty's Challenge will be featured between 5:55 and 6 PM by Jonathan Elias in his "One More Thing" segment.

Posted by Mark Sullivan at 6:59 PM