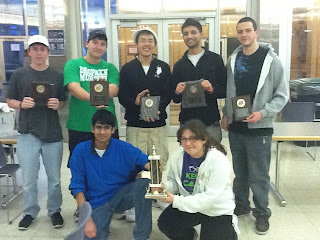 1st row: Prateek Rana and Dora Kadish 2nd row:  Danny Sullivan, Mike Warrino, Kevin Doan, Kartike Mathur, Will Sim
The Burlington High Chess Team celebrated its 2011-2012 season at the annual North Shore Interscholastic Chess League banquet at Malden Catholic Wednesday.  Burlington finish as the runner up in the Western Division of the League and surprised everyone by making it to the League finals, only to lose a close match.
The awards banquet featured a simultaneous exhibit of an international chess master playing against 30 boards.  Although team caption Kartike Mathur lost his match, the international master complimented Kartike by saying that “It was the most interesting of all the boards I played. The position was confusing with both sides having good chances.”
Awards were given to the top five boards in each division. Burlington winners were: Board 1: Kartike Mathur, 2nd place
Board 2: Will Sim, first place
Board 3: Steven Hong, 2nd place
Board 4: Mike Warrino, 2nd place
Board 5: Danny Sullivan, 2nd place.
Other players for Burlington were Kevin Doan, Prateek Rana, and Dora Kadish
Related articles: