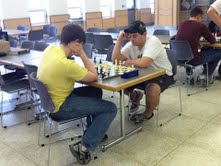 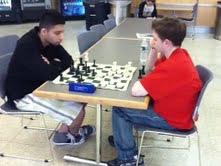 The Burlington High Chess Team traveled to Malden Wednesday and avenged an earlier league loss to the Malden Catholic Chess Team, defeating them by a 28-15 score in the semifinal round of the North Shore Interscholastic Chess League playoffs. MC stomped us 33-14 here back in November and were the regular season Eastern League Champions. So our revenge was so sweet! The match was a tight affair with Burlington falling behind 0-15 before rallying by winning the next four matches, topped off by Captain Kartike Mathur’s win. Burlington, the defending champions from last year, now advances to the League and State Finals next Wednesday and will play at Bedford. The Burlington winners were:

On Board 1: Captain Kartike Mathur shocked his previously undefeated opponent who was 11-0 in the League before his loss to Kartike. Karike was offered a draw which would have sealed the match for Burlington, but he refused because of his fighting spirit and his will to win. As he said, “A draw would have won the match, but if I accepted it, I would have always wondered if I really could have beaten him.”
On Board 3: Steven Hong crushed his opponent, catching him in a neat mating net.
On Board 4: Mike Warrino nursed his early material advantage to the end to secure a win
On Board 6: Kevin Doan outplayed his opponent from the start.
Other Burlington players were Will Sim and Danny Sullivan. 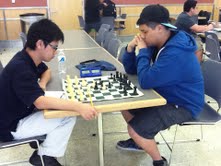