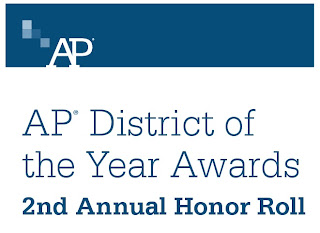 Burlington Public Schools is one of fewer than 400 public school districts in the nation being honored by the College Board with a place on the 2nd Annual AP Honor Roll, for simultaneously increasing access to Advanced Placement coursework while maintaining or increasing the percentage of students earning scores of 3 or higher on AP exams.  Achieving both of these goals is the ideal scenario for a district’s Advanced Placement program, because it indicates that the district is successfully identifying motivated, academically-prepared students who are likely to benefit most from AP coursework.  Since 2009, Burlington High School increased the number of students participating in AP from 125 to 180, while maintaining the percentage of students earning AP Exam scores of 3 or higher from 78% in 2009 to 70% in 2011.  The majority of U.S. colleges and universities grant college credit or advanced placement for a score of 3 or above on AP exams.
“We appreciate the recognition of the College Board,” said Burlington’s Superintendent of Schools Eric Conti.  “Like any district honor our progress would not be possible without the efforts and expertise of our high school administration and faculty.  It is their unyielding belief that all students can succeed and their daily commitment to successful learning across our curriculum that creates these results.”
The 2nd Annual AP Honor Roll is made up of only those public school districts that are simultaneously expanding opportunity and improving performance. The list includes 367 school districts across 43 states and Canada. Pennsylvania led all states with 34 public school districts named to the 2nd Annual AP Honor Roll, followed by Massachusetts and New York, both with 30.
“Participation in college-level AP courses can level the playing field for underserved students, give them the confidence needed to succeed in college, and raise standards and performance in key subjects like science and math,” said College Board President Gaston Caperton. “The AP Honor Roll districts are defying expectations by expanding access while enabling their students to maintain or improve their AP Exam scores.”
Many U.S. school districts have focused on expanding access to AP courses as part of a strategy to improve college readiness. These efforts have resulted in more students earning scores of 3 or better.  They have also resulted in more students earning scores of 1 or 2. Accordingly, there has been a slight decline since 2001 in the overall percentage of AP students scoring a 3 or better, a decline that can be expected in any program attracting a much broader cross-section of students.
Helping more students learn at a higher level and earn higher AP scores is an objective of all members of the AP community, from AP teachers to district and school administrators to college professors. Many are experimenting with a variety of initiatives and strategies to determine how to expand access and improve student performance simultaneously.
“This school district has achieved something very remarkable. It managed to open the doors of its AP classrooms to many more students, while also increasing the percentage of students earning high enough AP Exam grades to stand out in the competitive college admission process and qualify for college credit and placement,” said Trevor Packer, the College Board’s senior vice president of Advanced Placement and college readiness.
Inclusion on the 2nd Annual AP District Honor Roll is based on the following criteria:
Check out the entire list of honor roll schools here.