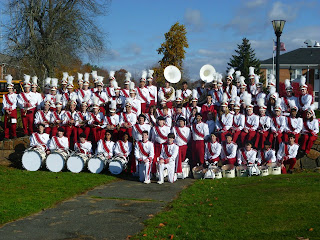 This Thursday morning the Burlington High School MarchingBand, our own dedicated group of student musicians, will astonish one and all during the opening ceremonies of the Thanksgiving Day game against Lexington at Burlington’s Varsity Field.
At any given home game, Burlington’s varsity football games open with the teams taking the field and baritone soloist Zaven Ovian performing the National Anthem accompanied by his fellow musicians in this dedicated marching organization.
This is not your typical opening and, by now, everyone knows that the BHS Marching Band is not your typical performing group.
This Thursday during the opening ceremonies of the final game of the season and a farewell to all seniors, the Marching Band will take the field just prior to their performance of the National Anthem, led by senior drum major Andrew Frost and junior drum major Eddie Gelberg. They will take their positions . . . and then at approximately 10:15 am they will forego the instruments they have played all season.
The Burlington High School Marching Band will sign, not sing,the National Anthem!
Burlington High School Marching Band director Matt Lovell came up with the idea at the beginning of the school year and following a passing mention to the band was delighted to find that members went to theinternet and self-taught the ASL anthem. The students took it to their fellowmusicians who learned it in no time.
To the best of their knowledge, no other musical organization has done anything of this kind.
This Thursday morning as spectators in the stands areprepared to rise for the playing of The Star Spangled Banner, they will rise, hear a single voice, and view a sea of words as the members sign in complete reverence and pride the lyrics to the national anthem of the United States of America.
Just another example of how the learning environment at BHS can have an affect on our students in more ways than we could ever have imagined!