With the first game of the World Series slated for tonight, we are excited to brag about BHS Alum Jason Yeadon who designed the logo for this year's Fall Classic.  I interviewed Jason last spring when he came to our 3rd Annual BHS Artist Alumni Day and shared this exciting news. Thanks to Jason for checking in again as his talents are shared with the world!
Guest Post by BHS Alum Jason Yeadon:
I work at "Major League Baseball Office of the Commissioner" as a graphic designer. I designed the branding and overall look for the 2011 MLB Postseason that is being used worldwide. It was started a year ago and is finally being used. If you turn on any TV or open any paper with a sports section right now, chances are you will see it. Coming late October it will be on hats, shirts, coffee mugs, championship rings and spray painted on each ballpark field to name.
Along with 2011 Postseason branding, I am currently working with the MLB Fan Cave   which is a new marketing initiative which integrates pop culture and baseball. It is a space in New York City where two guys have been watching every game for the entire MLB season. Along with watching games, celebrities and players visit and do "webisodes" which videos for the web that are posted online at MLBFanCave.com.
Right now one of the stars from the MLB Fan Cave is on the road bringing the World Series trophy from ballpark to ballpark and I have been lucky enough to go with him to assist with photography and video. We are only going to ballparks that are still in the Postseason and I will be in St. Louis tomorrow. 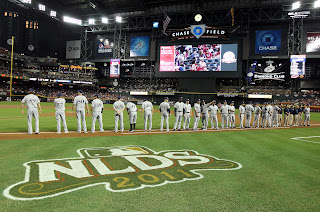 The picture above is a picture of the National League Division Series Logo from one of the games at Chase Field. Here is a link were you can find most of the other postseason logos.