IT'S ALL ABOUT THE SHOW: Great Guest Post By BHS Band Mom Vanessa Ovian!

This was originally posted on the BHS Music Boosters Blog 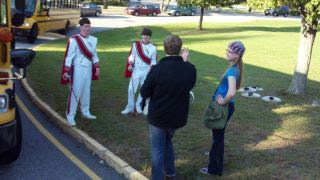 This is the year of lasts for me.

In what is my first of the lasts I attended my 11th and final Salem Marching Band Invitational in New Hampshire this past weekend as a BHS parent along with 3,000+ of my closest marching band friends and afficionados.

The Salem Marching Band Invitational is a rare experience at which our band students, dance squad and flag corps perform for a stadium filled to the max. Most of the bands over the past years have hailed from New Hampshire, with an occasional band from Maine. Burlington is the only group from Massachusetts to perform in recent years. Reminiscing about the past ten performances in Salem, I’d like to share some fond memories and observations.

• Size never counts! There have been marching bands as diminutive as 30 and as gargantuan as 350 members. No matter the size, each and every group has worked its hardest to come to this moment in time where their performance holds the attention of every musician and spectator. These bands are always fantastic!

• Why can’t we be friends? It doesn’t matter who is seated next to you, every parent shares in the joy of the next, cheering and whooping it up for every marching ensemble. It is quite a unique experience, one of which (and I'm quite sure about this) our own band members are unaware. We point out our own students, talk about previous years and, well, be just who we are . . . proud parents!

• R-E-S-P-E-C-T! Aretha may never know how much this word has meant to the musicians who take the field. Marching routines are always performed with nary a movement or noise in the stands. In fact, I remember being a bit startled at this during the first year I had attended.

• Imitation is the sincerest form of flattery! How true! Those of us who have attended a few of the Salem events have noticed that the innovative style of the BHS band has returned to the Invitational in subsequent years.

• The Show Must Go On! Sometimes there are near disasters. I will never forget the year we had a mishap with transportation, necessitating students, instruments, hats and plumes to cram into cars for the trip! My drive up to Salem included passing cars crammed with red and white, with brass instruments filling the voids!

• Instruments Abound! For a few years we have seen extended percussion ensembles on the field and sideline of the Salem Invitational, hauled in on large rolling barges! But it’s pretty safe to say that Burlington has become the innovator once again by introducing a full section of electric guitars, powered by a high-voltage car battery. That’ll be picked up next year!

• Neither rain, nor sleet nor . . . ! Still fresh in my memory was the nearly ill-fated invitational when the skies opened up prior to the event and it had to be moved into the gymnasium of Salem High School. Never fear. The BHS band hastily revamped its marching routine in the hallway just prior to their entrance and dazzled everyone.

• Dancin', Dancin', DANCIN'! They’re a dancing machine! As the years have passed, dancing moves have crept into marching band routines, dipping and swaying to the music, and I'm quite certain BHS had a lot to do with that! Adding a special pizzazz where no other groups could, the BHS Dance Squad has always been the only one of its kind and spectators throughout the stands are always impressed! This years’ rolling line of splits were greeted enthusiastically with cheers from the crowd!

• BHS Flags: The Fabric of Our Lives! The BHS Flag Corps has always provided flash and backdrop with their twirling athleticism on the field. Snapping and twirling with the rhythms on the field, their colorful displays are the accessory to the music, like the loveliest of jewelry on a beautiful garment.

• Something to aspire to. There is no question that our marching band students have been part of a remarkable event at the Salem Invitational. Their participation has always given them an opportunity to see what and how other schools are performing. Not only have they seen peers from other schools, they have also been given an opportunity to see how the colleges perform when the UMass Lowell and the University of New Hampshire alternate performance years.

The pin I purchased at the Salem Marching Band Invitational pretty much sums it up:

One day football will be played at half time!

IT’S ALL ABOUT THE SHOW!