From the BHS Music Boosters Blog 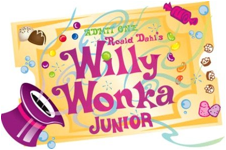 Burlington Educational Summer Theatre (BEST), a program of the Burlington Public Schools, returns to the stage of the Fogelberg Performing Arts Center for its third summer season with performances of Roald Dahl’s “Willy Wonka Jr.“ on July 23 at 2:00 and 7:00 pm.

Based on Roald Dahl’s timeless story of the world famous candy man and his quest to find an heir, the BEST production features more than 60 students from Burlington schools ranging in age from seven to thirteen. Adapted for the stage by Leslie Bricusse and Timothy A. McDonald, the memorable score features songs from the original movie, including “The Candy Man,” “Pure Imagination,” “Oompa Loompa” and “I Want It Now” by Academy and Grammy award winning composers Bricusse and Anthony Newley.

Returning to BEST this year are Jeanne Coroniti as Artistic and Music Director and Leanne Reardon as Choreographer, along with professional set designer Peter Waldron and award-winning costume designer Maureen Krebs. Joining them will be Beth Pendery as Production Director, Jill Keaney as Assistant Choreographer, Kevin Parker as Company Manager and Sammie Ellis as Production Assistant. BEST staff members also include a number of high school students and graduates, all veterans of Burlington High School productions, in roles as crew members and counselors, providing a unique mentoring opportunity for all the young students.

Due to an overwhelming response for its summer theatre program Burlington Public Schools has also created a brand new program running in tandem with the theatre production. The BEST Workshop provides an opportunity for its students to focus on performance skills that encourage self-esteem while building self-confidence. Directing the workshop is Endicott College educator and composer/performer Nanette Perrotte. Students are taught voice, acting and dance skills, monologue and audition prep and imagination skills. The workshop students will showcase their new skills in an exciting final performance on July 15 at 1:00 pm.