We were fortunate to have, Sonia Rollins,  a local expert on Egypt come in and speak with Mr. Whitten's social studies classes today about the revolution in Egypt.  Mrs. Rollins, a former Burlington Selectman a BHS parent, and an Egyptian-American, gave an inspiring account of the events that have unfolded in Egypt over the past few weeks.
The highlight for me was hearing the tremendous pride in her voice as she read an excerpt from New York Times Reporter Thomas Friedman's firsthand account of the events.

I heard so many celebratory chants, but none more accurate and powerful in its simplicity than this one: “The people of Egypt made the regime step down.’’

The overwhelming sense of personal empowerment here, by a people so long kept down and underestimated by their own government was a sight to behold.

The video below also gave me goose bumps, as did the faces of the Egyptians contained within it.  (When you watch it make sure you click on the cc so that you can see the translation to English.

Here are a few other things that I learned about the Egyptian Revolution:
1. Social Media played a huge role - The revolution gained a great deal of momentum from a Facebook page started by a Google executive. The like page called "We Are All Khaled Said" - was dedicated to a 28 year-old Egyptian who was grabbed during his daily time in an internet cafe and beaten to death by the police when he asked for a warrant on June 7, 2010. His death sparked a movement by Egyptians who felt that Khaled Said represented all Egyptians and what happened to him could have happened to anyone. 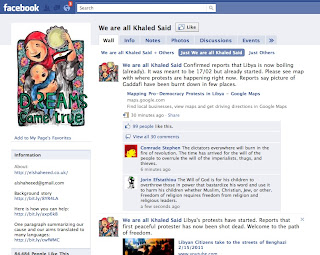 2. The citizens of Egypt were amazingly organized in their hold on Cairo's central Tahrir Square.  You need to check out the BBC's interactive map of the square.
On the map you can see a number of areas including: a bloggers area, a health clinic, a pharmacy, and the  section in the center of the square where bloggers gathered.
3. Religious differences were put aside in Egypt - On Friday the Coptic Christians surrounded the perimeter of the square as the Muslims worshipped in the center. On Sunday the roles were reversed when the Christians celebrated their day of worship and the Muslims surrounded the perimeter.
4. Is Military Rule A Big Improvement - Hearing that the President turned control of things over to the military may cause some to wonder how that improves things for the citizens of Egypt. However, according to Mrs. Rollins, each Egyptian fulfills a military commitment which means that the military is a group of citizens who are trusted by their countrymen.
5.Which Country in the Middle East will be next?
Thanks so much to Mrs. Rollins for sharing her knowledge of the Egyptian Revolution with us today!
Posted by Unknown at 9:44 PM