Back before Christmas Vacation, I wrote a blog post about our discussions to alter the way we weight courses at BHS.  This discussion began after some students and parents had questioned why Advanced Placement courses received the same weight as Honors courses. Our current grading scale is shown below. 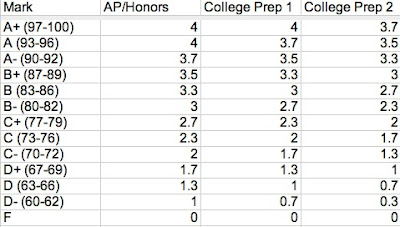 There were 29 comments on the post with some differing opinions on what the right course of action would be as we looked at the two options below as possible changes.

Before making a final decision, it is important to talk about one concern that was echoed in a few of the comments regarding a 5.0 hampering a students chance at a "prestigious college."  I want to assure parents and students that we would never make a decision that would hamper the ability of BHS students to get into the most competitive colleges. In addition, we would not make such a decision without speaking to college admissions representatives.

Having said this, we surveyed over 50 colleges and NONE said that our students would be negatively impacted by the type of change we are proposing. In addition, many of these schools stated that they recalculate students GPA's based on their own formula and give added weight for AP and Honors classes. Those that do not recalculate the GPA stated that they look at the rigor of the student's overall program.

The second decision between our two proposals is whether or not College Prep 1 (CP 1) and College Prep 2 (CP 2) courses would be weighted differently.  This discussion brought a great deal more discussion amongst staff as we discussed the reasons that we would want to make a change from the current system which give CP 1 courses greater weight. The rationale for making a change here and giving both CP 1 and CP 2 courses the same weight are as follows:

First, many of our inclusion classes are offered at the CP 2 level and because so many students on Individual Education Plans take these courses, there could be an argument made that we are not treating students on IEP's equitably.  In addition, a CP 2 weighting in the current system is actually weighted less than an elective course. This means that a student taking a core course such as English at the CP 2 level  would receive greater weight for an elective such as Food Prep or Microsoft Office.

Therefore, I will recommend Option 1 above which will give a greater weight to AP courses and put College Prep 1 and College Prep 2 courses the same weight.  The recommendation this Tuesday during the School Committee Meeting will be a first reading which will allow people two weeks to voice there opinion on these changes prior to a final reading and approval on Tuesday, January 25th. If this plan is implemented it would be in place for next year's 9th graders (Class of 2015) and all all future classes.

As always, feedback is welcome and needed!
Posted by Unknown at 6:30 AM