For the past two years the Burlington High School Art Department has welcomed back former students to discuss their careers as artists. Alumni who have recently graduated talk about their first year at art school, senior college students who are preparing to enter the work force share their portfolios and alumni who are working as designers and artists share their experiences and day-to-day activities at their jobs. Current art students have a chance to see and ask questions of the alumni. They are able to learn about art careers directly from the artists to whom they relate as members of their extended school community.


On January 7, 2011, the Burlington High School Art Department will host its third annual Alumni Artist Day from 7:30 am until 2 pm.


This year, Burlington will be welcoming back 1971 graduate William Duffy as the distinguished alumnus. Mr. Duffy, sculptor of the statue of a young man at the school's entrance, will be showing his sculptures and other works created over the last thirty-five years. In addition to being a professional practicing artist, Mr. Duffy teaches sculpture and computer 3D modeling at Towson University in Maryland as an adjunct faculty member. 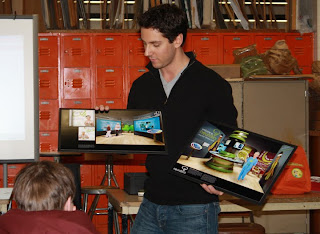 In addition, BHS will host Jason Yeadon, Burlington High School Class of 2005. Jason studied Graphic Design at Syracuse University and is now at Major League Baseball. Here is what Jason has to say about his professional work and the Alumni Artist event.:

I am a Graphic Designer at Major League Baseball. I work at the Office of the Commissioner in New York City in the design and creative services department. The design department is made up of ten people, and we do everything from ballpark signage to the logo of an event or the redesign of a club. Since I started with Major League Baseball 8 months ago, I have been involved in assisting the team with design for the MLB Draft, 2010 MLB All-Star game, MLB international events and the 2010 MLB Post-Season and World Series. I was able to get the opportunity to travel to the MLB All-Star game this past July in Anaheim, California where I was responsible for on-field signage, media and player availability staging and assisting in the pre-game show directing.

One of my biggest accomplishments so far is the creation of the 2011 World Series logo. It is an amazing feeling to know that something I created will be viewed on such a large scale by people not only in Burlington but all over the world. It is going to be on everything from Pepsi cans to ESPN to history books that cover the event.

I relate a lot of my success to Burlington and its art department. Because of BHS and my art teachers I was able to grasp an understanding of design much earlier than most people and transform that into a focus at Syracuse University. If it weren't for BHS I would not be where I am today. A lot of people say that art and design are not important classes to take and don't become an artist because you will never find a job. But this is completely false. This is one reason I feel it is important to come back to BHS for Alumni Artist Day, so I can share what I have learned and encourage students to think about majoring in and finding jobs in art and design.

In addition to connecting alumni with current students, Alumni Artist Day is an event that has connected alumni to one another, potentially to share resumes and job connections.


This year ten alumni will be presenting throughout the day. Stay tuned for more on the phenomenal BHS grads who will be back at BHS on January 7th.
Posted by Unknown at 9:00 AM