Many thanks to Ron Conti for these photos from Burlington High School Marching Band's performance at the Salem Invitational held on October 9 in Salem, NH.
To view all the pictures, go to the 2010-2011 BHS Marching Band Fan page on Facebook. Tons of video there, too!.
The wheels on the bus go round and round as the BHS Marching Band arrives at destination Salem. Three buses carried the band to the event, with snacks for the students provided by Hospitality Chair Shirley Fong. 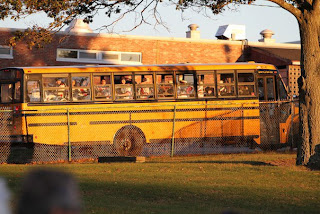 There is no way to adequately describe the masses of marching band musicians at the Salem Invitational, but the following pictures are an attempt. That's Burlington in the front, seated on bleachers on the field. In order to provide enough seating for spectators, the bands were placed on the field, as in our case, and on the visitors side. 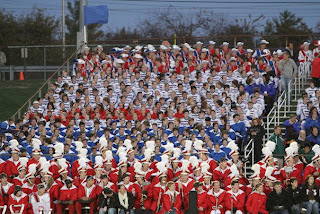 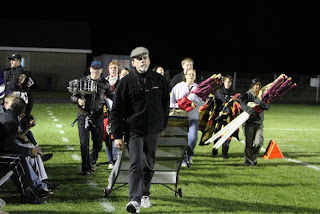 The parent volunteers from the BHS Music Boosters Association have been a tremendous help in moving our equipment on and off the field. Joining them for this year's Salem Invitation are alumni Eric Leva, Carolyn Kelly, Kevin Parker, Erica Dooley (Asst. Dance Coach), Alex Meier and Marissa diGregorio and Chelsea Rose. 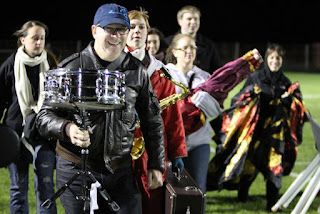 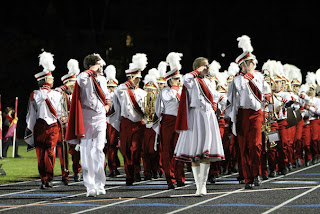 The Burlington High School Marching Band exudes class as they make their approach to the field and as they depart. They are trained to respect the genre and the discipline that it takes. The following pictures are a perfect example of this...check out how they are marching in step, no missteps here! A special note: as each band left the field and passed the BHS band, our drum majors were in full salute, honoring their fellow musicians. Another proud moment for the families in the stands. 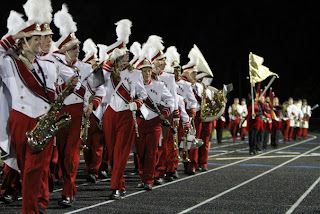 Congratulations to the members of the Burlington High School Marching Band. The hours and hours of rehearsal, on and off the field, paid off.