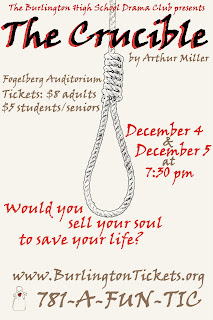 The Burlington High School Drama Club will present Arthur Miller’s classic play “The Crucible,” on Friday, December 4th and . The performances will begin at in the Fogelberg Auditorium of the high school.

“The Crucible” is an intense story that focuses on a group of Puritan girls who are caught dancing in the woods. Out of fear of consequential punishment and in an attempt to save themselves, they spin a dangerous tale of witchcraft that careens out of control and brings chaos to their community. What starts as a self-preserving lie leads to the destruction of many lives. The play is one that will leave audiences with both a sense of hope for humanity, and an understanding of what it means to be socially responsible.

A political allegory, “The Crucible” addresses two events in American history: the witch trials and the McCarthy hearings. During both these times, people were ruled by fear, which greatly affected the decisions they made. The dramatic plot of Miller’s play provides a fictional account of the trials in – from accusations to executions – and addresses themes of personal and social responsibility, as well as fear, hysteria, and the corruption of power. Miller’s play, a strong example of protest literature, is at once engaging and thought-provoking. Miller asks his audience to consider the parallels between the situation in and the problems implicit in Senator McCarthy’s hearings.

The production of “The Crucible” boasts a strong team of teachers who are directing, producing and designing for the show. Director Anne Ford (English), Producer and Lighting/Sound
Posted by Unknown at 7:42 AM