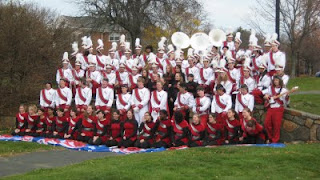 Band Photo from http://www.bhsmusicboosters.blogspot.com/
The Burlington High School Music Boosters Association is celebrating its incredibly successful Gala Benefit Concert and Silent Auction, A Magic Music Night, held on the evening of Saturday, November 7, at the high school. The event not only broke all records for a single fundraising effort in the history of the Music Boosters with an overwhelming 450 in attendance, it also provided a substantial amount of the funding required for the Marching Band trip to perform at Disney World in Orlando, Florida, in the spring of 2010.

In his introduction to the opening selection of the evening, “A Friend Like Me” from the Disney movie “Aladdin,” band director Matt Lovell likened the evening’s enthusiastic attendance to the Genie’s appearance after Aladdin uncorked the bottle. “As I see this show of support, it seems we’ve uncorked something else…a spirit of community and a spirit of friendship that is just absolutely as strong as a magic genie!”

The success of the Gala Benefit Concert and Silent Auction was felt on so many different levels, and enabled the Music Boosters to embrace and validate its mission to provide the music department and its students the necessary support to enrich their music experience during their years at BHS. We applaud all our donors, our students and the greater Burlington community for their spirit of community and friendship in making this event such a huge success.
This post was from the Burlington High Music Boosters Blog -http://www.bhsmusicboosters.blogspot.com/ .
Posted by Unknown at 7:36 AM