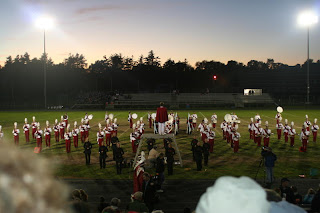 From the Music Boosters Blog -

Marching Band took to the field at the Salem (NH) High School Fourteenth Invitational Band Show. One of 16 bands participating in this event ranging in size from 27 to over 300 members, the BHS Marching Band of nearly 100 held its own as an annual favorite of the crowd of 3,000 in the stands.
Demonstrating not only its musical prowess but an ability to entertain the masses with its performances of "Star Trek Themes" and "Cantina Island" (music from "Star Wars"), the BHS bandies were described with great excitement by spectators as "a show band." The moment the Color Guard lit up the field with their sudden burst of flags at the beginning of the show, the crowd surrendered its attention to the Burlington band. From the dance squad members re-enacting the fight scene in "Cantina Island," to the rock and roll legs of the musicians, to the percussion section undulating rotation, the students from BHS made a huge impression on the spectators, bringing the crowd to their feet with wild cheers and a standing ovation when all was said and done!
The BHS Marching Band always seems to set the standard for new and innovative marching routines and often sees its ideas and movements brought back in the following years by bands who have been witness to their creativity. Congratulations to the entire Marching Band for their ingenuity and outstanding performance. Special thanks to Director Matt Lovell, Assistant Director Amanda Potts, Color Guard Advisor Jen Agati, Dance Squad Advisor Leanne Reardon and Percussion Advisor Joe Cincotta. Extra special congratulations to our student leaders, Drum Majors Eric Leva and Caitlin Riggs, Color Guard Captains Taylor Waisnor and Erin Kelley, and Dance Squad Captains Christina Kashgegian and Andrea McSheehy.
Posted by Unknown at 10:03 AM