The new Burlington town flag is ready to fly thanks to the creative efforts of Mr. Ratkevich's Graphic Design class from last spring. As we chronicled here on the BHS blog, a number of students created impressive new designs. The process was concluded during the summer when Sara Martin's final version was selected as the new town flag and Sara was honored by the Burlington Selectmen.

The flag was presented to the school by Selectman Walter Zenkin yesterday and it will be officially raised on the town common this weekend. The video above shows our new acquisition in our main lobby along with a look at some of the other designs that were considered. 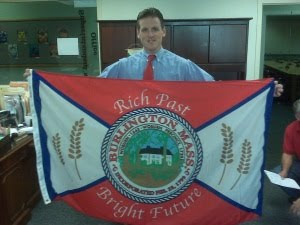 Picture from Dr. Conti's Blog
Posted by Unknown at 1:07 PM