More From The World Is Open

As I continue through Curtis Bonk's The World Is Open, which carries the subtitle How Web Technology Is Revolutionizing Education, I am plagued by the following summer-themed analogy. Having spent a number of hours at the beach this summer and in past summers, I love to watch my 11-year old catching waves with his surfboard. Many times I see the frustrated picture of my son missing the big wave and not catching the wave at the right moment. But my son has taken the right approach to his love of surfing, he learned to catch a wave by body surfing, boogie boarding, and he has graduated to surfing. 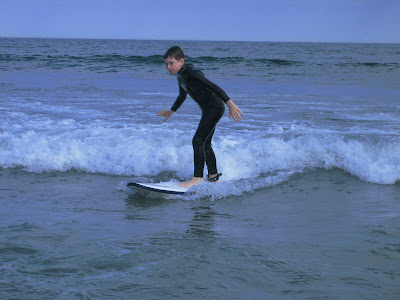 Unfortunately, I picture schools in a similar scenario albeit with more dire results. This is due to the fact that we are jumping into the water in the middle of an ocean of technology where the size of the waves is significant this is coupled with the fact that they are breaking fast, one after another.

Because of this, it is overwhelming for many in education and many of us are not quite sure where to begin. Despite the intimidating prospect of entering the water, we need to fully immerse ourselves and stop just dipping our toes in. We need to further our capacity daily and ensure that we are gaining the confidence to catch the new waves of technology that are breaking one after another right in front of us. We have to do this while we also try to catch up with the waves of technology that have already broken on shore.

Here are a few more excerpts from The World Is Open that summarize things as they now stand:

We have a lot of work to do in our schools to create this participatory learning culture. Fortunately, we have technological resources that we have never dreamed of at our fingertips to allow us to make this work manageable.