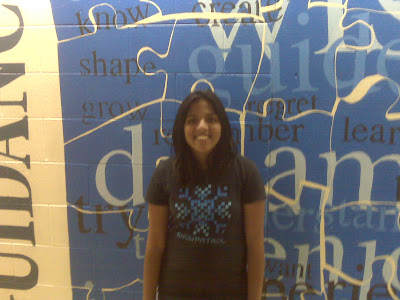 BHS Junior
Matthreyi Shankar Accepted Into
University of Southern California
Honors Program
Patrick M. Larkin, Principal of Burlington High School, is pleased to announce that Maithreyi Shankar has been selected to participate in the Resident Honors Program at the University of Southern California in Los Angeles. Maithreyi, currently a junior at BHS, is one of 33 students selected from a nationwide search to participate in this highly competitive early entrance honors program this fall. She has been awarded a Dean’s Scholarship from USC.

As a student at BHS, Maithreyi is a member of Model United Nations, the Latin Club and the Robotics Team. She is also a competitor with the Mathematics League, Science Olympiad and the Junior Varsity Field Hockey Team. Maithreyi volunteers at the Indian Association of Greater Boston and MIT’s Heritage of the Arts of South Asia. For the past two years, she has also taken part in the A.S.P.I.R.E. Leadership Conference. In 2008, Maithreyi was a student at the advanced Biotech Institute at the Roxbury Latin School.

“RHP is an excellent opportunity for high school juniors who are academically ready for the challenges of college and who are mature enough to get a head start on their college career,” said Dr. Pennelope Von Helmolt, director of the program.

Burlington High School has provided outstanding support for this talented student, both through academic preparation and strong recommendations.
Posted by Unknown at 7:37 AM