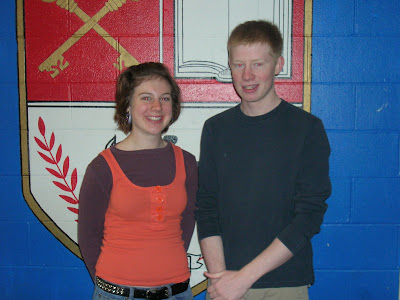 Congratulations to Chelsea Rose and Kevin Parker on their selection as the BHS SILS Winners for 2009. They will attend a luncheon at Vinny T's in Lexington in on May 7th along with the two winners from each of the other Middlesex League schools.

Chelsea Rose played both Aunt Em and a tree in the recent BHS production of The Wizard of Oz, She also played Chris Gorman in Rumors, Ms. Prism in The Importance of being Earnest, and Ethel Peas in Thoroughly Modern Mille. She has taken Drama class at BHS and plans to take Advanced Drama next year. She is also involved in Poetry Club, Band, Spectrum- Burlington's Gay Straigth Alliance, and Burlington's Hip Hop Dance Club. She is also a member of the BHS Girls' Lacrosse team.

Kevin Parker has also played a prominent role in the BHS Drama productions having most recently served as the Stage Manager for The Wizard of Oz and also having played a lead role in the fall production of Rumors. He was recently selected as the "Chorus Member of the Year" for his dedication to the program. He is a three-year member of the BHS Marching Band and Concert Band. He has been an active participant in community service activities with St. Malachy's Church, the BHS Music Boosters, and the BHS Latin Club. He is also involved in the 9th grade mentoring program.