Burlington Wrestling finished in 10th place at the 2009 New England Wrestling Championships in New Haven, CT. Burlington qualified 3 wrestlers for the tournament and they all won at least 3 matches. Matt Sherman, Kevin Barrucci, and Alex Giampapa each ended their season with exceptional showings. 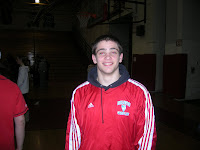 
130 pounder Matt Sherman finished 4th, Matt won 4 matches and lost 2. After winning his first match Matt beat 3x Vermont statechamp Jordan Gray of Essex Vt 6-1, Matt then flowed that win by pinned 2x NH State Champ Alex Smith of Timberlane in 2:46, Smith had beat Matt in their 2 previous meeting this year. Matt then lost in the semi finals to Rhode Island State Champ Nick O'Connell of Cranston West 4-2 in overtime. Matt next match he beat Gray of Vermont again, this time 8-5 and then in his final match for 3rd place he lost to Smith of Timberlane 4-2 in overtime finishing 4th. 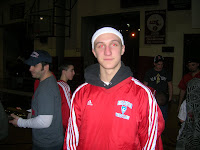