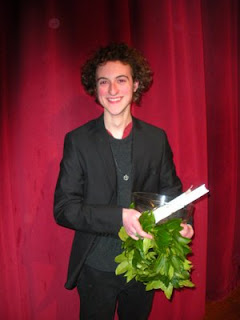 Great news -- David Murray is moving on to the Massachusetts Finals for Poetry Out Loud! He is one of 20 students from across the state who will be performing at the Old South Meeting House in Boston tomorrow, March 8. Several teachers made the trek to Framingham today to cheer on David: Shannon Janovitz, Katie Bercury, Ben Lally and Anne Ford were all in attendance.

David is advancing from the largest semi-final of the competition, competing against 15 other students from the general Metro-West area. He performed the same two poems that earned him the title of BHS poet laureate: "Madmen" by Billy Collins and "Sonnet CXVI" by William Shakespeare. He will recite those poems again tomorrow in the first two rounds of the Finals, and if he is selected to advance to the third round tomorrow afternoon, he will then declaim "Knucks" by Carl Sandburg.
More information about the Massachusetts Poetry Out Loud Finals can be found on the Huntington Theatre website.
Posted by Unknown at 3:24 PM