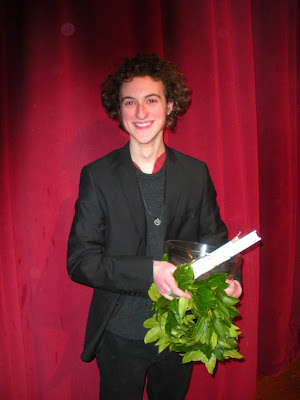 David Murray, the 2009 Burlington High School poet laureate, will compete in the Massachusetts state semi-finals this Saturday, March 7 at the Framingham Temple Association on 404 Concord Street in Framingham from 9:30 to 1 pm.

He will declaim both poems that he performed at the BHS finals: "Madmen" by Billy Collins and William Shakespeare's "Sonnet 116." He has also prepared a third poem, "Knucks" by Carl Sandburg, which he will use if he advances to the state finals on Sunday, March 8 from 9:30 - 1 pm at the Old South Meeting House in Boston. You can click here to see David's performance of "Madmen" from the BHS Finals.
Previous winners have done well at the state semi-finals. Zach Davis was the BHS representative to the Poetry Out Loud state semi-finals in 2007, and Briana Bensenouci advanced to the Massachusetts
Posted by Unknown at 9:07 AM