BHS Hockey Is Going To The Boston Garden For The Super Eight Finals!!! Unbelievable!!! 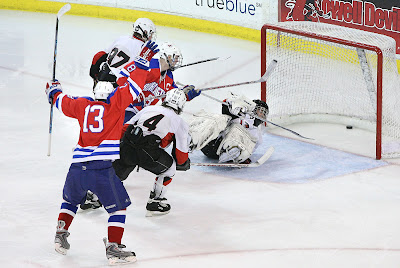 Brian Hanafin's (8) tipped in a Joey Yeadon blast from the point early in the third period. Paul Conceison (13) who assisted on the goal celebrates as the shot get behind the Winchester goalie. (Photo from the Boston Herald High School Sports Blog. ) 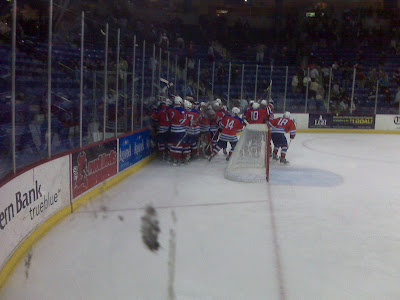 The Red Devils celebrate after the hard earned 1-0 win.

Brian Hanafin scored the game's lone goal at 4:20 of the third period, tipping home a blast from Joey Yeadon and Paul Conceison also assisted on the goal. The BHS defense backed by some great goaltending by Ben Irwin did the rest.
The Red Devils will take on Catholic Memorial, a 6-4 winner over Malden Catholic, at 7:30 on Sunday Night at the Boston Garden. Tickets will go on sale in the morning at BHS for $8.00. Tickets at the Garden on Sunday will be $13.00. There are no lower cost tickets for children or senior citizens.
We'll have a lot more information posted on the blog in the morning (actually later this morning).
Posted by Unknown at 9:58 PM