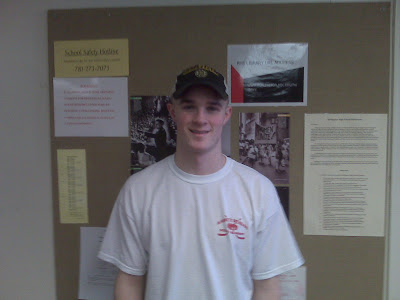 Brian Hanafin had a goal and an assist in last night's win.
The Boston Herald had a representative at the Ice Palace last night and an article posted today on the Boston Herald High School Sports Blog notes the impressive depth the Red Devils showed again last night as they topped Framingham 3-0 in the first round of the Cahoon Memorial Tournament."The Red Devils showed off the tremendous depth that will make them an attractive Super Eight team," noted the Herald's Joe Viera.
James Brine scored the first of three second period goals for BHS as the squad peppered Framingham's Cam Chassie with 50 shots. Brian Hanafin and Sean Duffy added the final two tallies as the Burlington boys, now 16-2-1 controlled the play throughout against Framingham which dropped to 11-9-1.
BHS will take on Chelmsford Thursday night in the finals of the Cahoon Tournament.
Posted by Unknown at 10:20 AM