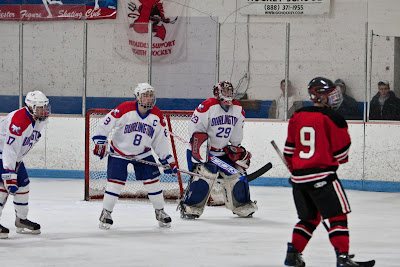 The BHS Defense Stood Tall Against Reading
(Photo by Rich Karlen)
Back in December, BHS ended Reading's 38-game Middlesex League winning streak. Last night, the Red Devils swept the season series with a thrilling 4-3 win against the defending Super 8 Champs.
Down 3-1 in the second period, the Red Devils got goals from Ryan Collins and Steve McLean to even things up. Steve McLean notched his second goal of the game in the third for te game-winner. BHS tightened the defense the rest of the way, limiting Reading to just four shots on goal in the third period.

The win keeps the BHS in the hunt for both the Middlesex League Championship and a spot in the Super 8 playoffs.

Check out the article from yesterday's Boston Globe high school sports section which projects Burlington as a Super 8 participant.
Posted by Unknown at 7:04 AM