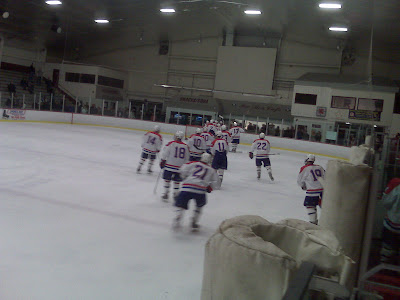 BHS players stream onto the ice after the game's final siren.

While the vote on Saturday left the Burlington High School boys hockey team just shy of a top six berth in the Super Eight, the Red Devils answered any lingering doubts with a convincing 6-1 win over Arlington Catholic.

BHS took control early on first period goals by sophomores Joey Centrella and Joey Yeadon and led 2-0 after one. Then in the second period the defense jumped into the picture as senior captain Brian Hanafin fellow blueliner and captain Paul Conceison each tallied within the first minute of the period to make it 4-0 Red Devils.

Conceison finished off the scoring in the third period for the 6-1 final. Senior Sean Duffy had a stellar night with three assists. BHS will open round robin play against Needham in the Super Eight tournament on Sunday at the Tsongas Arena at a time to be announced. 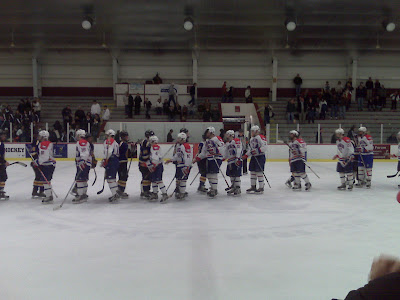 The postgame handshake was against a backdrop of empty bleachers on the AC side as BHS sent the opposing fans to the exits early. 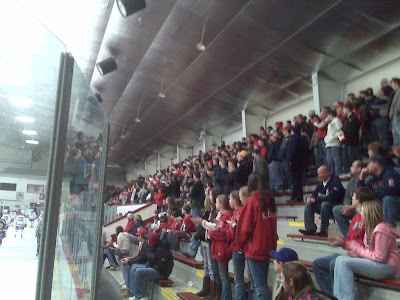 The BHS fans were present in force for the entire 45 minutes.
Posted by Unknown at 11:27 PM