The Latest News From The BHS Music Boosters 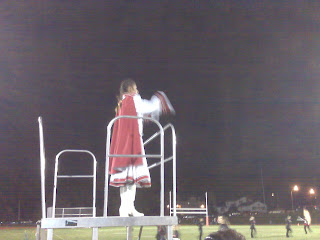 Hemali Patel leads the band during halftime of the Belmont game.
Here are a couple of excerpts from the latest issue of the Music Boosters Newsletter:

IN CASE YOU DIDN’T NOTICE
At the most recent home football game against the Red Devils, the half-time show was complimented by the addition of the Belmont High School Marching Band. For a period of time the only performance was by the BHS Marching Band. The Belmont group performed selections from Pirates of the Carribbean and it was wonderful. What you may not have known if you didn’t attend the game was the comraderie shown between the two bands. Marching into their cadence at the fence where the Belmont group was watching, our own students immediately lowered their instruments and raised a hand to shake the nearest Belmont player’s hand. WOW, were the band parents and fellow spectators SOOOOO impressed. Bravo, Mr. Lovell and troupe, for a wonderful way to end the halftime show! We were absolutely filled with pride!
VETERANS DAY PARTICIPATION

This year both the Marching Band and the BHS Select Singers will participate in the Veteran’s Day commemoration on November 11. This day of tribute will be the 90th anniversary of Armistice Day and Burlington’s sole survivor will be present. Please make sure you add this to your calendar … it is a very meaningful and touching ceremony. The music students will travel by bus from the high school and will arrive at Pine Haven cemetery for a 10 am start.
A VERY SPECIAL EVENING OF MUSIC AT BHS
Burlington will be a cultural hot spot on Saturday, November 8, 2008, when the Burlington High School Music Boosters Association hosts, "A Night of Musical Indulgences…from Broadway to Bach." The performance, a benefit to support the programs of the Music Boosters, will take place at 8:00 pm in the Fogelberg Auditorium of the high school located at 123 Cambridge Street, Burlington, and will be followed by a complimentary Gala Post-Concert Dessert Reception in the Joan F. Miles Library of the high school. A silent auction will also take place during the evening so be prepared to bid on theatre tickets (North Shore, Boston Lyric Opera, Comedy Improv), a 3-night stay at the Burlington Marriott and many other items that will tempt you!
General admission tickets for "A Night of Musical Indulgences…from Broadway to Bach "can be purchased at 781-238-6842 (781-A-FUN-TIC), or at the door. Ticket prices are $20 for adults and $15 for students and senior citizens, which include admission to the Gala Post-Concert