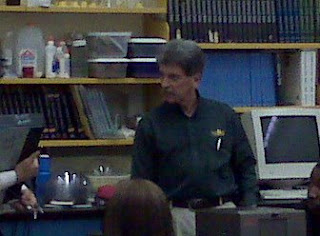 Bernie Lyon speaks to Mr. McRae's Astronomy class.
Mr. McRae's Astronomy class got a close-up of a wide-range infrared camera on Friday thanks to Bernie Lyon from FLIR Systems, Incorporated in North Billerica . FLIR stands for Forward Looking Infrared Systems Wide-range infrared camera and the price tag on the camera that Mr. Lyon brought to class was in excess of $30,000.
The following excerpt comes from the FLIR website: Infrared IR cameras were originally developed by the United States Navy to assist in the identification and targeting of opposition forces. FLIR units measure the amount of infrared energy emitted by various objects and life forms. In other words, it allows the user to "see" the amount of heat (or thermal energy) an object emits. Infrared energy is normally invisible to the human eye, but FLIR cameras are able to detect and interpret emissions and provide the user with an image, even in complete darkness. Like conventional night vision enhancement systems, FLIR thermal imaging does not provide a perfect picture of what is in its field of view. What it does provide is an image with sufficient clarity to allow users to distinguish between cars, trees, and people.
Scroll down for more pictures from class.

Four Astronomy students through the lens of the infrared camera.

An infrared picture of a piece of plain white paper after a student touched it. 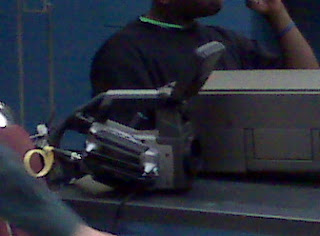