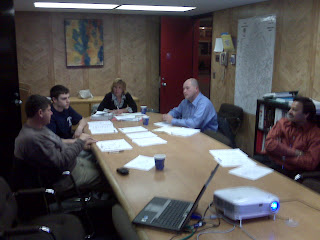 Members of the School Council discuss priorities for the year.
The Burlington High School School Council held its initial meeting of the year last night. All are welcome to aattend these meetings which will be held on the third Tuesday of each month at 6:30 p.m. in the Main Office Conference Room. The minutes can be found below.
Burlington High School
School Council Minutes
October 21, 2008
1. Introduction of Members & Role of School Council - The 2008-2009 student representative is Peter Russo, who is vice president of the Student Council. There will be a request for new members sent to current BHS parents either via the Principal’s blog or a mailing.

b. The school improvement plan for the year will be reviewed.

c. The school handbook will be reviewed for next year. The changes made to this year’s school handbook regarding IPods has met with no complaints received from teachers. Peter Russo reports the students enjoy the controlled use of IPods.

2. School Improvement Plan (Possible Goals for 2008-2009) - A copy of the items the school will report on in the 5-year progress report which is due in March of 2009 was handed out. A draft will be ready for the December meeting for the School Council to review. One huge improvement noted by members is the BHS website and the Principal’s blog. There were many areas of improvement in the BHS website which the parents have remarked favorably on.

3. Future Topics/Goals – Mr. Cullen brought up issues from last year that we still need to look at for this year.

a. A student athlete handbook addressing grades needed to achieve to play sports. The MIAA rules are not strict enough. Mr. Larkin suggested an extra curricular handbook to not single out athletes as the only group needing to achieve a certain grade to participate. This would also include a criteria for student officers.

c. Class rank and new students. Mr. Larkin reported that that has been changed and that a student has to be a BHS student for two years to have a class rank.

4. Other – Peter Russo reported that seniors don’t have enough time to meet with their guidance counselors for college planning. Mr. Larkin reported that that is under discussion and hopefully something can be worked out. Mr. Tigges reported that the Burlington Interact Club had 57 students participate in the Buddy Walk in Wakefield. This was the most amount of people in one group. The walk raised $170,000 dollars. Mr. Larkin suggested that we invited Mr. Jackling, the advisor for Alcohol Ed, to a meeting to discuss his program and alcohol use among teens. The Mentor program pairing upper classmen with freshman has gotten off to a good start. An invitation to a future school council meeting will be sent to the Leadership Team.